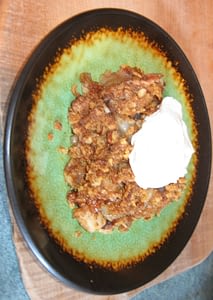 This was a "Lord have Mercy" moment.  Seriously.  I think I have finally done it!  It has only taken me 100 years to figure this one out, and yes, I may have said this before....but this time I really really mean it!  The secret for a delicious, yummy, gluten free "crisp"....is to omit the flours from the "crisp". Eureka, finally, a really, good gluten free fruit crisp!  This "crisp" stood out on it's own.  Lordy Be!!!  How long have I waited for this discovery.  Over the years, looking at different recipes, they all include Gluten Free flours added to the crisp.  Honestly, I just never liked them.  They tasted too much like flour.  I wanted CRISP!  And this is it.... 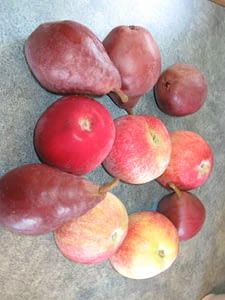 Preheat the oven to 350 degrees, and generously grease a casserole dish with butter.  Peel and slice the apples and pears, squeezing in half the juice of a lemon, and toss to coat.  In a separate bowl, combine the cornstarch, brown sugar, cinnamon and ginger - whisking to combine.  Pour this mixture over the fruit, mixing well, until the fruit is well coated.  Transfer the fruit to the casserole dish. 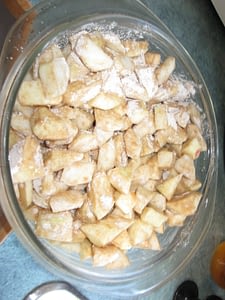 In another bowl, combine all the ingredients for the crisp.  I used  a fork to mix in the butter, to get a crumbly texture.  Spread evenly over the fruit, and dot the top with extra pads of butter.

Bake at 350 degrees 45 minutes to 1 hour, or until the fruit is cooked tender.  Serve with whip cream or ice cream....soooo good!  From now on...this will be the only way I make a "Crisp" of any kind, Yeahhh it worked!