Well, this is the last of my homemade frozen pesto, from the summer.  It has been raining for days, gray and dark outside too.  Pesto had to fit the bill to bring some sunshine into these gray rainy days!  I also found some beautiful Organic Rainbow Swiss Chard - not too local, however, it was so fresh and beautiful looking I could not pass it by.  Oh dear...it is only January and I am already dreaming of sunny warm days.  One can dream can't they?
1 cup of brown rice
2 cups of water
1 egg
1/2 cup Parmesan cheese
In a pot, bring the water to a boil, adding in the brown rice, reduce to a simmer, lid on and cook until water is absorbed and rice is tender, about 50-55 minutes.  Set aside to cool.  Once cool add in the Parmesan cheese and egg, mixing well to combine.  Transfer to a lightly greased 9X11 inch pan, pressing down into the pan.  Bake in a preheated oven at 350 degrees for about 15-20 minutes.
4 large Rainbow Swiss Chard, stalks sliced finely, then bunch up the greens and slice (Kale would be lovely too)
1 large leek, trimmed, sliced in half and then thinly sliced - rinsed well
3 minced garlic cloves
Olive oil
Salt and Pepper
5 Tblsp. Pesto Sauce - homemade or store bought
2 large Roma Tomatoes, sliced
1 cup of grated Swiss Gruyere cheese and 1 cup grated Aged Cheddar cheese
While the rice crust is baking, heat up a frying pan on just under medium heat, with a good drizzle of olive oil.  Add in the swiss chard stalks, leeks, garlic salt and pepper.  Saute about 5-7 minutes. 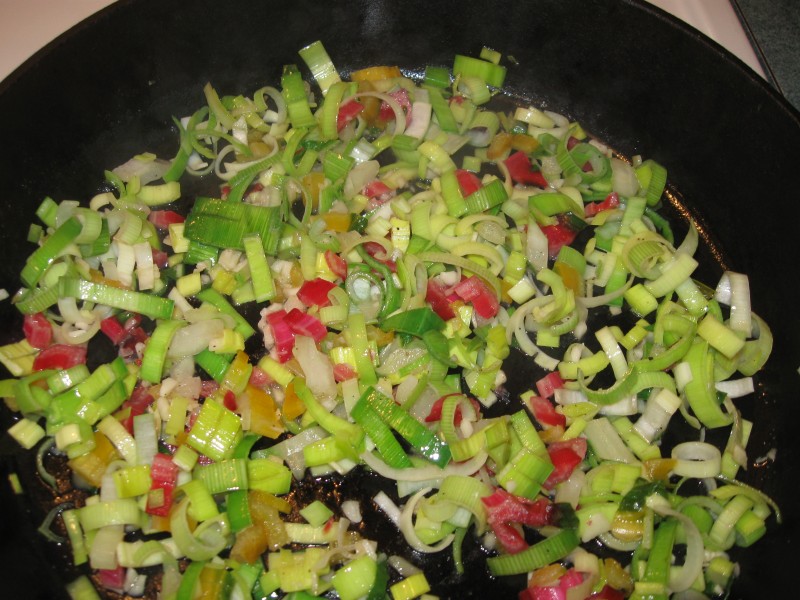 Then add in the sliced greens, continuing to saute another 5-8 minutes, until tender.
Once the rice crust has baked, remove from oven to cool about 10 minutes.  Spread on the Pesto sauce, evenly to coat.  Then evenly distribute the Swiss chard mixture, and cover with the sliced tomatoes.

I mixed up the two cheeses, and distributed evenly over the top.  Bake in a 350 degree oven for 15 minutes.  Let rest 5 minutes before slicing.