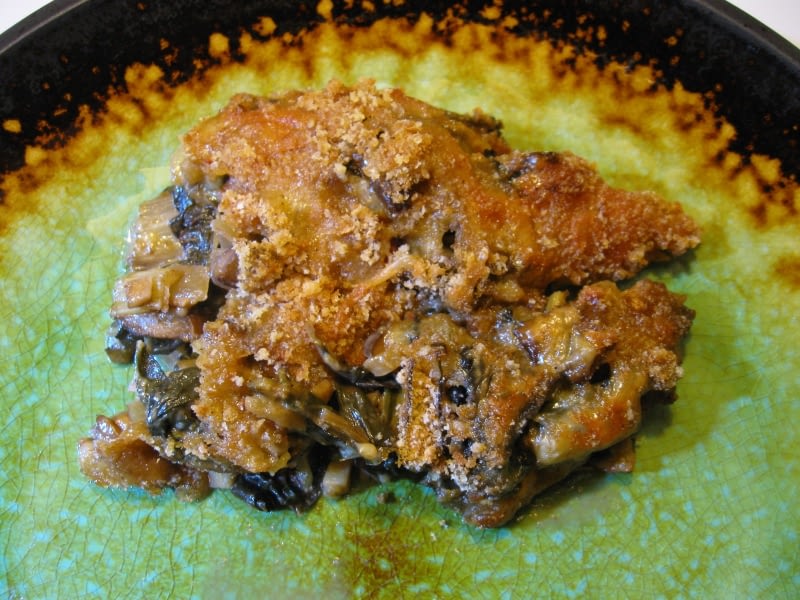 We received 2 huge bunches of fresh Swiss Chard from our Organic weekly farm delivery, so with one bunch I decided to make up a gratin.  Our temperatures are now dropping to freezing levels, so we will probably  not be seeing any more Swiss Chard until next year.
Most of the chard was green, but there were a few yellow and red chard's in the bunch - such vibrant color, full of goodness.  We also made a new discovery:  Swiss Emmental Cheese.  Normally I would use Swiss Gruyere cheese when making a gratin, but I was not able to get any....then we saw the Swiss Emmental, and I thought lets give it a try.  While I was grating it, I took a taste.  Hmmmm,  I was not too sure about this cheese.  However, in this gratin it was delicious...it gave a sweetness and a richness to the dish that would otherwise not have been there. A great cheese to use in any gratin which we will definitely be using again.
16 Swiss Chard's, remove stem, and cut into 1/2 inch sized pieces, cut the chard leaves into thirds then roughly chop
3 Tblsp. Extra Virgin Olive Oil
1 cup roughly chopped crimini mushrooms
1 large shallot, roughly chopped
2 large minced garlic cloves
2 Tblsp. Balsamic vinegar
1/2 cup chicken stock
good pinch of nutmeg
salt and fresh cracked pepper to taste
1/4 cup cream - we use lactose free
1/4 cup gluten free bread crumbs
1 cup Swiss Emmental Cheese - grated
1/4 cup fresh grated Parmesan Cheese
Heat up a large frying pan on low medium heat with the EVOO.  Add in the mushrooms, sauteing until their juices have released.  Add in the shallot and garlic, continue to saute for 5 minutes. Add in the chard stems, sauteing for five minutes. 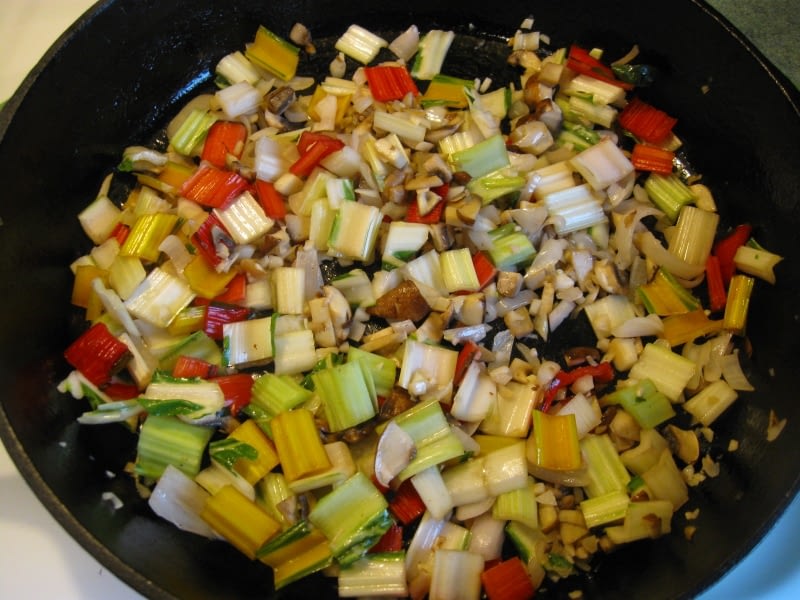 Add in the balsamic vinegar and seasonings mix well, lid on and cook for another 8 minutes stirring occasionally.
Add in the chopped chard leaves and 1/2 cup of chicken stock.

The leaves will reduce in size, keep the lid on and stir occasionally for another 8 minutes.  Remove the lid, continue to cook until the liquid is reduced by half.

Pour in the cream, stirring well.  Add in the Parmesan cheese, mixing through out and remove from the heat.  Transfer to a baking dish and preheat the oven to 350 degrees.
Cover with the grated Swiss Emmental cheese, and top with the bread crumbs.  Bake until the top is nice and golden - about 40 minutes.